A discussion between two top French doctors on live TV left viewers horrified when they proposed that Africa should become a giant laboratory for coronavirus vaccine testing because the continent lacked the resources to defend against COVID-19.

In the segment broadcast on the French TV channel LCI, Jean-Paul Mira and Camille Locht raised the idea of testing new vaccines on impoverished African populations.

Mira is head of the intensive-care department at the Cochin Hospital in Paris, while Locht is the research director at the French National Institute of Health and Medical Research, known as Inserm.

“If I can be provocative,” Mira said, “shouldn’t we do this study in Africa where there are no masks, no treatment, no intensive care? A bit like we did in some studies on AIDS. We tried things on prostitutes because they are highly exposed and do not protect themselves.”

Locht agreed, saying: “You are right. We are actually thinking of a parallel study in Africa to use with the same kind of approach with BCG placebos,” referring to vaccination against tuberculosis that Inserm says has appeared to protect children against infections, particularly respiratory ones.

“We will in fact think seriously about it,” he said.

The footage, broadcast Wednesday, triggered a deluge of outrage accusing the doctors of white colonial attitudes.

Drogba, who is from Ivory Coast, tweeted: “It is totally inconceivable we keep on cautioning this. Africa isn’t a testing lab. I would like to vividly denounce those demeaning, false and most of all deeply racists words.”

“Welcome to the West, where white people believe themselves to be so superior that racism and debility become commonplace,” tweeted Ba, who is from Senegal. “Time to rise.”

Inserm, ranked as the world’s second-best research institution in the health sector, issued an official statement on Twitter saying the proposal had been “wrongly interpreted” and included the hashtag “#FakeNews.” 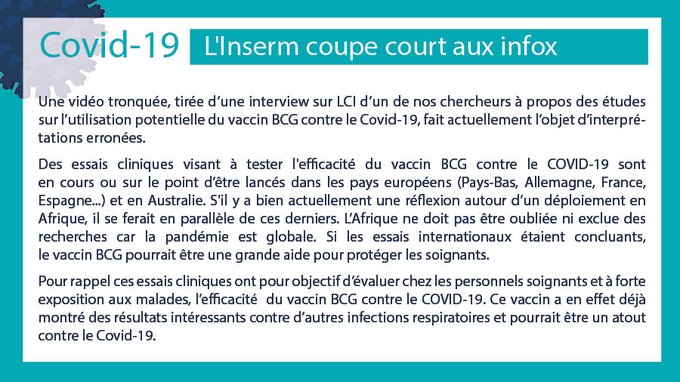 On Thursday, there were more than 6,700 confirmed coronavirus cases and 229 deaths in Africa, with many countries imposing a range of preventive and containment measures against the spread of the pandemic, according to African health officials.

Do you have a personal experience with the coronavirus you’d like to share? Or a tip on how your town or community is handling the pandemic? Please email covidtips@businessinsider.com and tell us your story.

And get the latest coronavirus analysis and research from Business Insider Intelligence on how COVID-19 is impacting businesses.

Isaiah Israel is a graduate of the University of Hawaii Pacific with a bachelors in Psychology and a deep love for history in which he believes that when you know the past you can understand the present and predict the future course of man and mankind and is the author of the best selling ebook The White Man's Burden Of Lies and Deceit.

This site uses Akismet to reduce spam. Learn how your comment data is processed.